Memorial Societies began in the 1930's in the USA and were formed by people who did not agree with the form the traditional funeral was taking, with increased cosmetology, elaborate caskets, abundance of flowers and resulting high cost. These people felt the public was often unaware that an alternative arrangement could be made and felt that information and education was essential so that those consumers who preferred a simple funeral arrangement or had real financial constraints could have a funeral at a moderate cost.
The idea spread and many Memorial Societies were formed in the USA and eventually in Canada as well. All Memorial Societies are non-profit and primarily or entirely run by volunteer boards of directors and special committees. A very modest lifetime fee (usually about $40) provides a member a comprehensive Handbook on funerals, Pre-arrangement forms, a Vital Information form,  and membership cards.
The Calgary and District Funeral Co-operative Ltd., was registered under the Act and a charter was granted. The initial co-operative representatives were: Les McNichol, Southern Alberta Dairy Pool, Alan Gant, Co-operators, Arthur Turner and Alan Gibson representing Calgary Co-op Centre Credit Union and Alberta Wheat Pool. The first annual meeting was held in September 1966 and Gil Jamieson became Chairman, and Phil Davidson, Paul Greig, Allan Grant, Allan Gibson, Art Norington, Walter Vysohled and Les McNichol became directors. Irene Stobbe replaced Les McNichol as director at the next meeting. Calgary Co-op and the Credit Union Federation of Alberta advanced the co-operative $600 in start-up money and the Co-op Center Credit Union processed memberships at its only office in the Co-op store on 11th Avenue. It was difficult to solidify a contract with funeral homes in the first year until Bruce Laxdal of Garden Chapel; a staunch Co-op supporter; offered a very good deal. A five year contract was signed. However, because of his bold action, Mr. Laxdal's Garden Chapel was expelled from the Funeral Directors Association.
Funeral societies across Canada had difficulties relating to the name, so in l97l the name was changed to The Calgary Co-operative Memorial Society Ltd. The Board insisted that it was in the interest of the association and the members to retain our full co-operative status and our ties to the other co-ops so the articles of incorporation; bylaws, authority and philosophy stayed the same. At this time, the lifetime membership fee was set at $20.
By 1980, it was difficult to stimulate enough interest from the older membership to become candidates for the CCMS board. It was decided to try and involve some of the younger more enthusiastic officials of the interested co-ops.

After careful consideration by the Board, new supplemental bylaws were compiled and passed at the Annual Meeting in November 1980. They were registered on December 4, 1980. The new bylaws provided for the establishment of corporate members and carefully avoided limiting the same to co-operatives. An educational trust fund was established to accept tax-deductible donations. Organizations that had shown interest in CCMS were invited to take out corporate memberships. The Board approved rules to govern corporate members use of bylaw 4c (in place at the time). However it was decided that although the idea was good, the rules were too complicated. Corporate memberships never materialized. 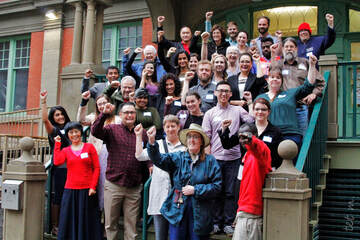 CCMS moved from a home-based business into a small office in the Old YMCA building on 12th Avenue in the Beltline community (see photo). The old YMCA turned into the CommunityWise building -a resource centre for small non-profits. CommuntyWise is located on Treaty 7 territory, home of the Kainai, Piikani, Siksika, Tsuut'ina, Stoney-Nakoda and Metis Nation, Region 3. ​
The market study suggested a funeral co-operative would be viable in Calgary. The exploratory group formed a steering committee again chaired by Mrs. Terry Geib. The first task was to obtain grant funds from the Co-operative Development Initiative funded by the federal conservative government.

In late 2009, CCMS received a grant for $26,500 to fund a feasibility study and development of a business plan. Over the course of the next 12 months, both were completed. In January 2010, Mrs. Geib provided a presentation at the AGM explaining to members the results of the research. Despite the evidence that there was enough demand in Calgary to support a funeral co-operative, the CCMS board agreed that current contractual arrangements provided a sufficient cost savings to members. In addition,  with the recession was well underway, the board did not want to start a new venture.

In the meantime, the board agreed to share its business case with other groups interested in starting a funeral co-op in other parts of Canada and even Ireland and more than $5,000 of the remaining grant was returned to the government. Despite not moving forward at the time, the board agreed to consider implementing the business plan to start a funeral co-op should contractual arrangements with existing providers no longer provide sufficient benefits to the members. ​
In 2010, the CCMS board endorsed a strategy to place the membership application on its website so it could be filled out and sent electronically by new members. Soon after adding the electronic form, the board added the ability to pay for the membership using PayPal. Since then, use of this method for purchasing memberships has far surpassed the old-fashioned way of mailing cheques.

In 2011, the website was rebuilt to give it a fresh and more youthful look and feel. More information was added over the course of the year and a password protected section for directors to archive minutes, reports and resources was added
In 2012, business was growing. CCMS now had surpassed 40,000 memberships and more than 300 members attended its AGM. Sylvia Kasper, the previous Vice Chair became the Board Chair and Terry Geib was appointed as the Vice Chair. The Board appointed a Strategic Planning Committee (consisting of George Melnyk, Terry Geib and Stuart Cantrill) to recommend a future course of action for the society. The Committee came back with 2 primary recommendations: 1) switch to a more robust membership database so members could access and update their information online; and 2) expand services to members by establishing contracts in other south Alberta communities, and more services to members such as workshops, guest speakers and discounts to related services.  The Service Provider Committee set upon its work to renew the soon-to-expire contracts with the service providers.

In October 2012, under the project management and hard work of Vice Chair Terry Geib, CCMS launched its new cloud-based membership system. All active members were mailed a username and password instructions to access their information electronically. Word of the added benefits quickly spread and members of all ages embraced it enthusiastically. At the AGM in 2013, with 375 members in attendance, the board of directors received a loud applause from the members for its ability to create the new system for less than 2% of industry cost. At the same meeting, CCMS unveiled its new 24-page full-color Final Arrangements book and a new look to its brochures for the new contract period.
​
CMS continues to thrive, saving families between $800 and $6000 on funeral expenses depending on plan selection. More than 46,000 members have joined since the co-operative was formed in 1965. General costs of doing business have increased considerably since the last fee increase in the 1970's. In August 2016, the board finally raised the membership fee to $40, and the record fee to $35 in line with memorial societies across Canada and less expensive than many memorial societies in the United States. ​
In 2020, the way most people held funerals changed dramatically around the world in the face of the COVID-19 pandemic. Limited mass gatherings forced families to think of new meaningful ways to memorialize their loved ones who had passed away. Memorialization became even more meaningful with more emphasis placed on tributes and social media.

The Calgary Co-operative Memorial Society board held a strategic planning session with the goal of better understanding the changing needs of members and then setting out to meet those needs. A short term plan to  increase engagement with members and to learn more about industry trends and opportunities was established for 2021. The board will meet in late 2021 to then plan next steps.

In the meantime, the board put into place its first electronic newsletter that includes member surveys. The newsletter will be sent out 3-4 times per year. It also abbreviated its name to the Cooperative Memorial Society - to be reflect the services it provides across southern Alberta. This is now being used in social media and in all new brochures and advertising.
Excerpts from history written by Allan Gibson September 8, 1986 with additions by Terry Geib in December 2011, November 2012 and December 2018.
Cooperative Memorial Society (CMS)
Suite 204A, 223-12th Ave. S.W. Calgary, Ab. T2R 0G9 Canada (Appointments required)
1-403-248-2044
​Toll free: 1-800-566-9959
admin@calgarymemorial.com
​